This document describes the methods of predicting inter-coded macroblocks in P-slices in an H.264 video compression codec.

Inter prediction creates a prediction model from one or more previously encoded video frames. The model is formed by shifting samples in the reference frame(s) (motion compensated prediction). The AVC CODEC uses block-based motion compensation, the same principle adopted by every major coding standard since H.261. Important diﬀerences from earlier standards include the support for a range of block sizes (down to 4x4) and fine sub-pixel motion vectors (1/4 pixel in the luma component). 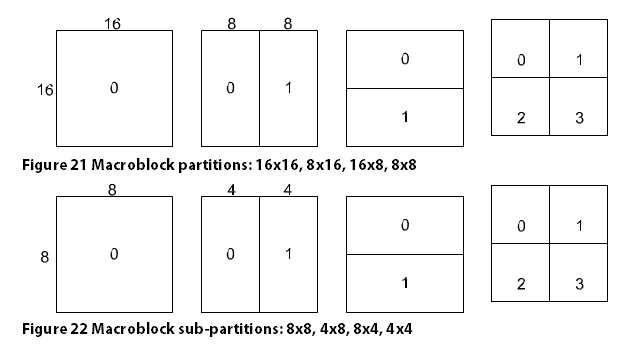 A separate motion vector is required for each partition or sub-partition. Each motion vector must be coded and transmitted; in addition, the choice of partition(s) must be encoded in the compressed bitstream. Choosing a large partition size (e.g. 16x16, 16x8, 8x16) means that a small number of bits are required to signal the choice of motion vector(s) and the type of partition; however, the motion compensated residual may contain a significant amount of energy in frame areas with high detail.

The resolution of each chroma component in a macroblock (Cr and Cb) is half that of the luminance (luma) component. Each chroma block is partitioned in the same way as the luma omponent, except that the partition sizes have exactly half the horizontal and vertical resolution (an 8x16 partition in luma corresponds to a 4x8 partition in chroma; an 8x4 partition in luma corresponds to 4x2 in chroma; and so on). The horizontal and vertical components of each motion vector (one per partition) are halved when applied to the chroma blocks.

Example: Figure 23 shows a residual frame (without motion compensation). The AVC reference encoder selects the “best” partition size for each part of the frame, i.e. the partition size that minimizes the coded residual and motion vectors. The macroblock partitions chosen for each area are shown superimposed on the residual frame. In areas where there is little change between the frames (residual appears grey), a 16x16 partition is chosen; in areas of detailed motion (residual appears black or white), smaller partitions are more eﬃcient. 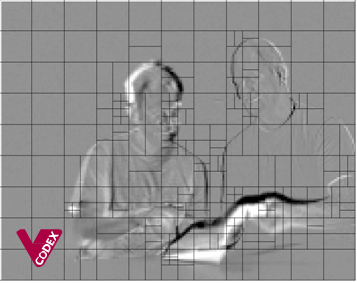 Each partition in an inter-coded macroblock is predicted from an area of the same size in a reference picture. The offset between the two areas (the motion vector) has ¼-pixel resolution (for the luma component). The luma and chroma samples at sub-pixel positions do not exist in the reference picture and so it is necessary to create them using interpolation from nearby image samples. Figure 31 gives an example. A 4x4 sub-partition in the current frame (a) is to be predicted from a neighbouring region of the reference picture. If the horizontal and vertical components of the motion vector are integers (b), the relevant samples in the reference block actually exist (grey dots). If one or both vector components are fractional values (c), the prediction samples (grey dots) are generated by interpolation between adjacent samples in the reference frame (white dots).

If the video source sampling is 4:2:0, 1/8 pixel samples are required in the chroma components

(corresponding to ¼-pixel samples in the luma). These samples are interpolated (linear interpolation) between integer-pixel chroma samples.

Vcodex is led by Professor Iain Richardson, an internationally known expert on the MPEG and H.264 video compression standards. Based in Aberdeen, Scotland, he frequently travels to the US and Europe.

Professor Richardson is the author of “The H.264 Advanced Video Compression Standard”, a widely cited work in the research literature. He has written three further books and over 50 journal and conference papers on image and video compression. He regularly advises companies on video codec technology, video coding patents and mergers/acquisitions in the video coding industry. Professor Richardson leads an internationally renowned image and video coding research team, contributes to the MPEG industry standards group and is sought after as an expert witness and litigation consultant.