We will illustrate the coding process for one example, MVDx (motion vector diﬀerence in the x-direction). 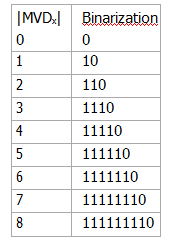 (Note that each of these binarized codewords are uniquely decodeable).

The first bit of the binarized codeword is bin 1; the second bit is bin 2; and so on.

Context models and binarization schemes for each syntax element are defined in the standard. There are a total of 267 separate context models, 0 to 266 (as of September 2002) for the various syntax elements. Some models have diﬀerent uses depending on the slice type: for example, skipped macroblocks are not permitted in an I-slice and so context models 0-2 are used to code bins of mb_skip or mb_type depending on whether the current slice is Intra coded.

At the beginning of each coded slice, the context models are initialised depending on the initial value of the Quantization Parameter QP (since this has a significant eﬀect on the probability of occurrence of the various data symbols).

The arithmetic decoder is described in some detail in the Standard. It has three distinct properties:

The definition of the decoding process is designed to facilitate low-complexity implementations of arithmetic encoding and decoding. Overall, CABAC provides improved coding eﬃciency compared with VLC at the expense of greater computational complexity.

Vcodex is led by Professor Iain Richardson, an internationally known expert on the MPEG and H.264 video compression standards. Based in Aberdeen, Scotland, he frequently travels to the US and Europe.

Professor Richardson is the author of “The H.264 Advanced Video Compression Standard”, a widely cited work in the research literature. He has written three further books and over 50 journal and conference papers on image and video compression. He regularly advises companies on video codec technology, video coding patents and mergers/acquisitions in the video coding industry. Professor Richardson leads an internationally renowned image and video coding research team, contributes to the MPEG industry standards group and is sought after as an expert witness and litigation consultant.